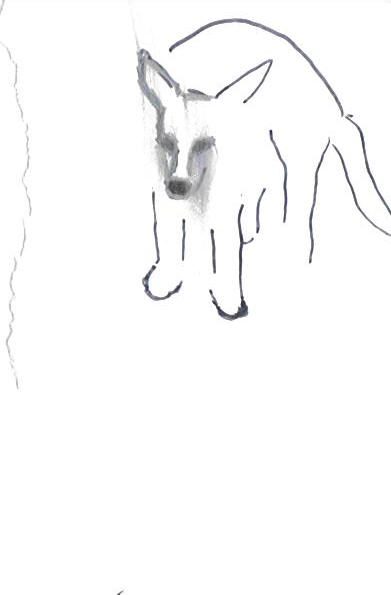 I just write/express something. I know it has no meaning to anybody who could read it. Probably not. And maybe that is not even really important. I don’t really understand how “our” language works. Some things are felt as important when one hears or reads them. Must have something to do with the relevance something has for a human.

The human machinery is totally powerful and makes everything apart form itself valueless. (…) It’s unnerving that whatever I’d like to say, I always use THEIR language to express my feelings that don’t fit in with their ways. At least in that sense I just shouldn’t say anything.

I think subjectivity can be really important. Regarding humans: Most people I meet are never really individual at all. They think the more they come across as adapted to all those human images, the more value they have. As if being adapted would make any real decisive difference. Of course they do have more value in our society then – but there is just more than our human society!! On the other side at the same time, if you criticize all the human crap, people react with an allergic reaction to it. Criticizing it would be a last way to stay attached to this society.

I know of course its an illusion to think one could be able to change some human structures just by making some arguments that would only base on your own subjectivity. But all that seems to be common in humans just seems ….

Talking about bringing yourself in as an indivual, with msicro-activism, individual activism, call it whatever … maybe subjective activism to give it a more specific quality:

it is a major problem for me personally to see how people often get stifled in “commonplace human social hierarchical structural behaviour and connected ways of internalized, normalized thinking” when they try to bring themselves into any field of social interaction and debate.

People meet fixed forms and structures and finding themselves to voice particular perpsetivical points and specific views just by themselves, wears them out and frustrates them over time.

Activism isn’t a very pluralist fired in society. You have to become neglectful of resonance, which is hard because activism gets “measured” by the amout of “resonance” you seem to measurably create. But waiting for feedback makes you dependent on people who might not get your message or who might expect messages to only come in certain ways or to contain only certain content they consider to be potentially meaningful.

So how do people creativively and thoughfully bring their own views and ideas into the public sphere? Currently the prerequisite seems to have become either the coreographic forms of activism where you are one of many and blend into phrases and concepts given by demo organizers or you come form the academic field, where you circle around citing other academics to generate your theses.

The problem is only that of empowerment. People’s subjectivity and nonhuman subjectivity equally should be top if we are going to aim for more than just a representative democracy as a form of our social self-organization in collectives.

I am sad on one hand about how many activists I met that have given up speaking out publicily or who have withdrawn from the field due to feelings of resignation because they received so little constructive feedback.

And I am sad how little people are able to reflect and openly recognize the own forms of shaping this world by nonhumans, as a counter-culture to anthropocentric and biologistic concepualizations of the world.

If we keep acting as if the “brains”/mind and the voice of the world comes or has to be filtered by any kind of hierarchical, collectivist human social structures, then we just keep practicing hegemony on a basic but fundamental social level, and we keep being an obstacle to animal rights empowerment (meant in a non-thechnocratically lived subjectivity-friendly way) … , where we all are and should be understood as fully resposible and fully self-creative meaningful agents in live on this wonderful planet.

We give the power to those who act deustructively, but be don’t see the small and supposedly “irrelevant” voices, which we don’t even consider to be a voice speaking for themselves at all. The structures we require for e.g. a  “voice” to be considered a valied “voice”, and structures overall are a huge problem, they make up content themselves and we need to be much more careful and scrutinous with all of them.