Three snippets from my essay “What is an animal and what is a human?”

“We can ask if the interpretations of the characteristics, that are considered to make up the marking dividers within a human-animal hierarchy, are in reality a negation of the autonomous value of otherness in nonhuman animals.”

“We know that the single criterion [against which we measure anything nonhuman animals do] that serves as our standard, is the human parameter, i.e. the human model counts as the ideal, as the standard, for creating norms. So what happens if we put this standard of measurement into doubt?”

“Biology has already determined what the identity of nonhuman animals is, and even the Animal Rights movement has satisfied itself with placing the moral question somewhere out of reach by accepting the explanation of the identity of animals as something strictly biological.” 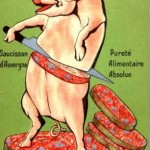 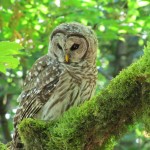 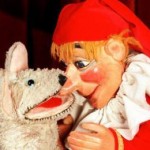 The image on the left is severely speciesist. I still can not really fathom why some feminists make that comparison between the “treatment” or I guess rather objectification of women in advertisement etc. with “meat”. Meat is a solely speciesist problem, I expanded a bit on this critique / controversial aspect at this location: https://simorgh.de/niceswine/feminism-and-animal-rights

It’s a PDF, check it ! http://www.veganswines.com/superfiles/horizon_of_homocentrism.pdf

One Response to Three snippets … moving beyond the horizon of homocentrism