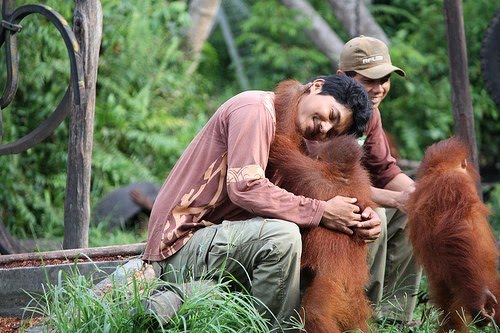 When speciesism feeds speciesism, and why AR activists should not fall for unproductive rhetorical twists.

From a recent discussion / Gruppe Messel

This Text as a PDF (link opens in a new window)

A.)   The (unfortunately) highly controversial debate about Halal and Kosher slaughter methods.

B.)   The ‘humane meat’ marketing campaigns, using Animal Welfare as the as a vehicle for their sales boosting.

In both these speciesist segments – the one religious, the other one more plain-culturally based – you face an upholding of speciesist ideological tenets, additionally to the front-fight of defending a speciesist practice.

Why are we discussing these two examples of speciesist praxes?

Pro-arguments defending these two praxes, that are finding their basis in cultural reception, have permeated the AR debate to some extent on outreach strategies in regards to multiculturalism and culture – assuming “traditions” to be fixed societal phenomena/entities, immune to continuous ethical historical change.

The Problem of rhetorical twists permeating the AR discussion in the case of A.):

The basic argument from an AR side defending religious slaughter methods, as no less “cruel” than pre-stun methods, goes that Nonhumans suffer either way, conditions in slaughterhouses might even be worse, at least as bad, and that all slaughter must stop.

Usually missed in this string of argumentation is a more detailed critique why e.g. slaughterhouses such as those designed by Temple Grandin are for example “as bad” as religious slaughter methods: So called “humane” slaughter methods have to be criticized and critically examined in their own respect.

The argument against the relativization of ‘different speciesist practices’ as in the case A.) from an AR position can be:

Why are we fighting to be able to film abuse in factory farms, when in the end of the day the comparably more abusive form of “handling” does not make any difference at all? After all we are always trying to alleviate any comparably more “extreme” forms of suffering in a situation where we can’t stop speciesism overnight. We do that, alongside with campaigning for veganism!

The trap with religious animal killing practices is that the degree to which killing becomes a deed of “good” is mostly being overlooked let alone critically discussed. Can you really expect strict believers to end killing Nonhumans, if it’s on behalf of an “almighty God” who decrees you to do so?

From an AR point of view we would say that no religion/religious tradition/belief whatsoever must come before either Animal Rights or Human Rights, equally.

The Problem of rhetorical twists permeating the AR discussion in the case of B.):

Anecdotal example: A German animal advocacy group advertises for “humane meat” with the slogan: “For a life before becoming meat” (http://www.provieh.de/downloads_provieh/01_ki_schweine.pdf, 5/11/14), the same slogan is being used by the Austrian Green Party (http://www.gruene.at/europa/2-welle,5/11/14).

The problem being that cultural tenets of speciesism are not questioned, nor what strategies are effective at what given context. Strategies and analyses seem to fall short to a short-term mass-movement idea and behaviour within the AR community.

– There is no clear line drawn towards the impacts of what comes along as cultural heritage.

– Activists fight against the symptoms, not the cultural roots of speciesist rethorics that enables speciesist practices to be culturally active.

On one hand “humane slaughter” advocacy has moved “down”, in terms of Animal Advocacy ideals, to some of the “stricter” Animal Welfare organizations, like the CIWF with for example their recent campaign “Better-Chicken.org”: it seems that such welfarist pro “humane meat” campaigns throw the baby out of with the bathwater, since instead of trying to seek alleviating suffering with the goal of ending speciesism overall as a target, they are of course prolonging speciesist culture.

However, AR advocates who do distance themselves from such campaigns, seem to fail to address (analytically and strategically) how important it is to target the functionality of speciesism and its rhetoric in the plain culturally-based sense.

– AR places its critique more at the sociological and the psychological level, not as much on the anthropological and cultural level, and when at least not with a distanced view.

– A question would be e.g.: How does the argument “I only buy organic humanely slaughtered meat” set in? Why is it accepted in society seen from a cultural / anthropological critical perspective?

This type of question has to be contextualized with how a culture works, and how the individual takes a role within this cultural setting for example.