Eating, crushing, as a form of wielding power over other living beings … Elias Canetti in ‘Crowds and Power’ pp. 210-211: 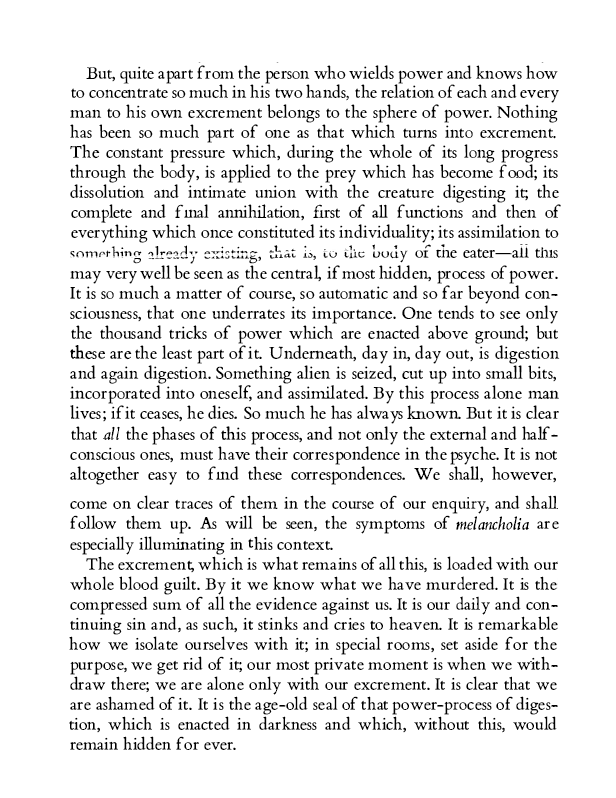 I don’t agree with much of Canetti’s view on nonhuman animal behaviour in this nevertheless excellent piece of work of his. However, these thoughts about the ingestion of flesh as an act of wielding power over another animals life, are unique.

Another of his thoughts about human domination over nonhuman animals in the same publication is noteworthy too:

The Entrails of Power: ‘ …But even more than fear or rage, it is contempt which urges him to crush it. An insect, something so small that it scarcely counts, is crushed because one would not otherwise know what had happened to it; no human hand can form a hollow small enough for it. But, in addition to the desire to get rid of a pest and to be sure it is really disposed of, our behaviour to a gnat or a flea betrays the contempt we feel for a being which is utterly defenseless, which exists in a completely different order of size and power from us, with which we have nothing in common, into which we never transform ourselves and which we never fear except when it suddenly appears in crowds. The destruction of these tiny creatures is the only act of violence which remains unpunished even within us. Their blood does not stain our hands, for it does not remind us of our own. We never look into their glazing eyes. We do not eat them. They have never – at least not amongst us in the West – had the benefit of our growing, if not yet very effective, concern for life. In brief, they are outlaws. If I say to someone, ‘I could crush you with one hand,’ I am expressing the greatest possible contempt. It is as though I were saying: ‘You are an insect. You mean nothing to me. I can do what I like with you and that won’t mean anything to me either. You mean nothing to anyone. You can be destroyed with impunity without anyone noticing. It would make no difference to anyone. Certainly not to me.’

Pesi Girsch aestheticises the corpses of dead animals on some of her photography.

On her bio she portrays herself with a baby kitten nevertheless: http://members.tripod.com/pesi_girsch/bio.htm (accessed 23rd April 08 ), so one can assume that she sees some qualitative difference between being amongst the living or being amongst the (I assume) somehow made-to-be-dead. I guess I rightly assume that the ducks and the weasel type of animal on the dead animal photos of hers, did not die from natural causes.

One could say that it gives the dead animal a dignity to be draped into becoming a display for a photo taken by a human for them animals to look aesthetical while dead. But I wouldn’t agree with that. I see a type of typical encryption here, which turns art into a tool for viewing the real with the specific attempt to find an objective standpoint, instead of arts as a way to only relate to the real in a subjective way, which would put an emphasis on a more free and autonomous thinking.

Why does the arranged corpse of an individual animal has to become an object of a photo?

Why are the dead animals displayed in a sterile, soft and clean – a seemingly peaceful or mute – context on Peri Girsch’s photos, when the real death of the animals had – and this is my assumption – been taking place in a wholly different context that preceded this type of setting.

What matters to me is the perspective of the animals, and I automatically imagine that they didn’t want to die through the hands of humans (the photos leave it factually unclarified how the animals came to death). The set up encryption subtly suggests that I need not care about these individual animals as a viewer. That they only matter now that they have been given a meaning in an anthropocentric context.

Both is depressing: the imagination of the death and seeing the animals displayed in this way of peaceful, aestheticized “bizarreness” on the photos. Worst of all is to imagine that the lives, i.e. the form of existence of beings other than humans, doesn’t matter as lives to the photographer. Pesi Girsch arranges the condition of being dead in these animals in a way that is demeaning to their selfness and to their otherness from us.

More that I wrote about speciesism and art can be found at these locations : http://www.farangis.de/blog/category/animalistic-issue , http://www.simorgh.de/objects/tag/arts-and-speciesism/