What about the cult of flesh

It seems to be enough today to eat veggies for a day or adopt the vegan or vegetarian lifestyle for a period of time and then go round pose as a post-vegan informer of a real truth about “meat”-eating or hunting or any other speciesist and non-vegan-compatible action.

When we think about the ideally vegan world, with a vegan society, and I really mean a society with society here, then we don’t think about the ideology of speciesism and how that is installed in our societies, most likely anywhere today on the globe.

Veganism is a moral education to some extent, but morals don’t create legally binding rules.

If human rights were dependent on the moral understanding of people alone, we’d still have torture and killing all around pretty much I think. We as ethical vegans should not overlook the dangers of speciesism. When we ask people to go vegan, we should bear in mind that the “habit” of “meat”-eating didn’t start just because the humans of the past just happened to be speciesist. The human past evolved from being speciesist to still being speciesist exactly on the grounds of held views, beliefs, attitudes, thoughts, philosophies.

Changing the lifestyle only does not go deep enough. One or more thousand years of deeply embedded ways of thinking within a society have to be changed, both on the individual and on the societal level. And the tragic thing with speciesism is, that humans built their understanding of what humanity means mainly on the basis of considering nonhuman animal life as a “lower” life form in a comparative measure to their own life form of being > HOMO SAPIENS.

What we as ethically driven vegans are asking for is a revolution. This encompasses a change in behaviour most of all firstly, but inasmuch it needs a change in thinking – well of course! And that’s where the question about what that cult of flesh is sets in.

I recently had this short exchange on diaspora that I want to close this blog entry with. It’s about just some examples of vegans-turned-animalkiller. 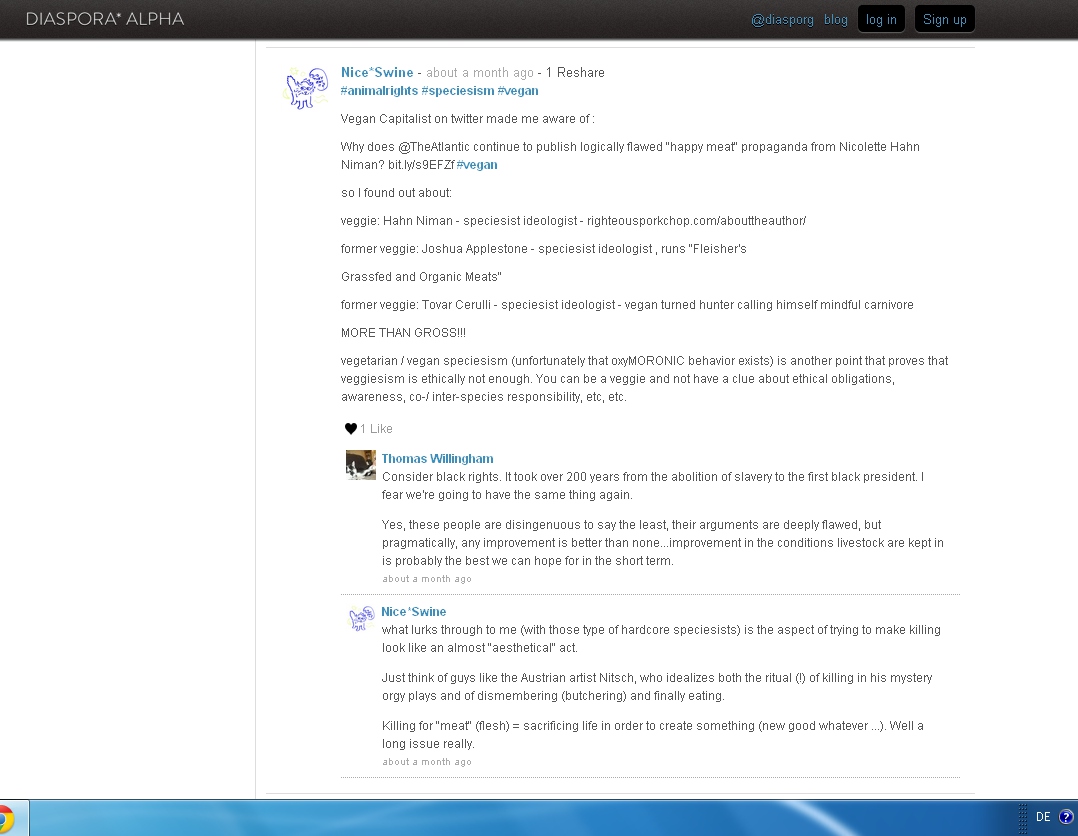