I called Andy Martin of Unit in an email recently a “former punk”, saying how glad I was to know the more kind-of-authentic-people in that context like him. Here is his reply to me which I found so inspiring that I asked him if I could blog his input on that issue:

Andy: …what? WHAT? WHAT? ‘PUNK MUSICIAN’? Madam, how dare you! I was never a ‘punk musician’. I was certainly never a punk and plenty of people (especially former band members) would insist I was never a musician either. If I was anything, I was a Mod, albeit one without a parka, scooter or records by The Who.

I sent Andy then this wonderful photo of his former band “The Apostles”, writing … : 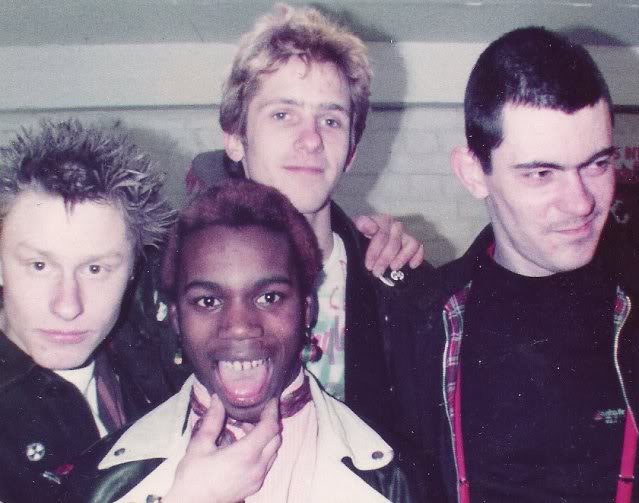 Gita: Considering that you weren’t punk and that you were more something of a Mod your music is creatively unimaginably innovative and this highlights also how free music could be. Shame punk stifled such branches …. I admire that attached pic …

Andy: When and where the devil was this taken? I have absolutely no memory of it although, perversely, I do recall that black Harrington jacket. The others are, from left to right, Pete Knight (Primal Chaos, The Assassins Of Hope, The Paramedic Squad), Mitch Thingy whose surname I can never remember (Flack, Hagar The Womb) and Martin Black (Flack). It was Mitch who wrote about 40% of the music and 20% of the lyric to Drained, the track on Panem Et Circenses. I’ve no idea what happened to any of these people although I did receive an email from Pete Knight circa 2014 or 2015, just a brief note to tell me he remembered what I did in the 1980s…damned by faint praise, as the saying goes…as you may imagine, I responded with a caustic email to tell him he would do better to remember me for what I am doing now. He did not reply. Oh well, another one bites the dust. I detest letters and emails that drone on and on about ‘I remember when you played that gig in Woofing In The Stuff in 1984 and Grimly Crustworthy vomited all over your drum kit etc blah blah’ ugh and double ugh! Maybe I live now in an almost permanent state of morgenmuffel but I believe we must think ahead, not look back. The past is gone, dead and buried; certainly we must never forget it but it is more important to me to concentrate my attention on what happens now – let us celebrate the future!

I think the problem here is that for many people – perhaps for the majority of people – who were involved in the punk / alternative scene in the 1980s, they were between 16 and 25 years old, in the prime of their youth, in an attitude of discovery and social unrest they found exciting (and also frightening) so for them the decade is crammed full of happy, vibrant memories. Fur mich – very different! I was often angry, frequently miserable and thoroughly irritated and annoyed by my poverty, my battle against dyspraxia, my battle against being queer, my constant physical battles against Nazi skinheads (from most of which, I am justifiably proud to announce, I emerged victorious) and my interminable squabbles with spoiled, pampered white middle class rat-bags who believed they had the right to tell everyone else how to live their lives. Ye Gods, when Andy Nunn first showed me excerpts from that Kill Your Pet Puppy website and some of the lamentable dialogues included in its chat room or whatever it’s called, I felt my toes curl with embarrassment. How can middle aged people be such arschlocher?

Earlier today I discovered our You Tube subscription tally has jumped from 294 to 299 in just 3 days. Does it matter? Of course not…but I’m still rather smug and self satisfied. Isn’t it wretched? Then I think of those videos, you know the kind to which I refer – Next Door’s Cat Sits In A Bucket – which has 2.5 million views – and suddenly I cease to feel quite so smug and self satisfied. Even Skrewdriver and other Nazi numbskull groups have tens of thousands of views and umpteen hundred subscribers. It is a horribly humbling experience!

Gita: I want to thankfully link to an interview we held with Andy Martin for our publication “Tierautonomie”:

Note: it might not be the right place to note this, but looking up many people who made impressive independent music in the early eighties and seeing they have quite an active “fanbase” still heralding and profitig from their activities, it’s astounding how little we are able to put infos and documents together in an encyclopedic form. I notice this also with partly art and creative work from other decades, like the 50ies and 60ies. Result is: keeping legacies will probably depend on single initiatives and individuals. Pages that function like Wikipedia or the cultural industrial museal complex are not seeing parts of history from the level of a very democratic basis that just exists in creativity … .